Exploring Theravāda's connections to other paths - what can we learn from other traditions, religions and philosophies?
Forum rules
Post Reply
22 posts

Apart from all of these, The new Indian Hindu propaganda propagates that Gautham Buddha is just 9nth incarnation of Hindu God Vishnu, thus by claiming that, they are tagging Buddhism as simple as an offshoot of Hinduism. 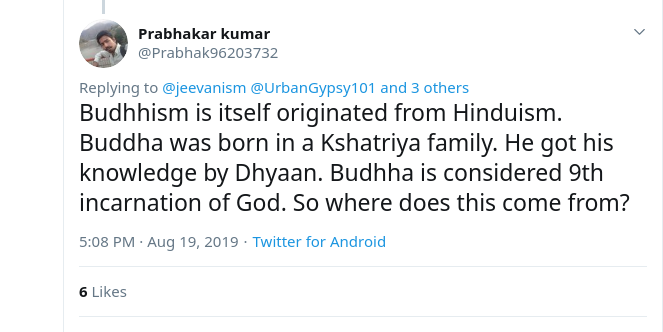 After 1956, the revival of Buddhism started in India, only because of Dr B R Ambedkar and his Navayana Buddhism. There is a socio-political aspect in Buddhism applying on this contemporary era but superstitious / mal-formed trends like Mixing Hinduism actually pushing people away from it.
Top

It seems Hinduism didn't even exist before Buddhism therefore the tags sound strange.

"Strange" suggests "unusual" or "unorthodox" but stealing, borrowing or claiming gods, heroes and festivals from other religions is not at all unusual. For instance, Christianity's major festivals, Christmas and Easter, incorporate Roman midwinter and New Year celebrations (see, e.g. http://www.humanreligions.info/christmas.html and http://www.humanreligions.info/christmas.html - it's a junky site but you will get the idea).
As for the relationship between Buddhism and Hinduism, the historical truth seems to be that Buddhism grew from Brahminism and that Brahminism later developed into what we would recognise as Hinduism. However, modern Hinduism https://en.wikipedia.org/wiki/Neo-Vedanta is really a nineteenth century development and synthesis of a lot of older traditions.
As always, reality is far messier than any description of it. We make nice tidy stories out of it by ignoring what we don't like and borrowing what we need.

KiwiNFLFan wrote: ↑
Thu Aug 08, 2019 11:23 am
When I visited Thailand recently, I noticed that there were elements of Hinduism incorporated into the Thai culture. I saw a shrine to Shiva near Chinatown in Bangkok. Statues of Ganesh were on sale along with Buddha statues. When I visited the Sri Maha Mariamman Temple (a Tamil-style Hindu temple) in Bangkok, there were just as many Thais making offerings as there were Indians. I visited the Erawan Shrine where Brahma is worshipped, and there are several other shrines to Hindu gods in the area too. But the thing that interested me the most was the Devasathan - a Hindu temple built by Thais in the Thai style to worship Hindu gods including Vishnu and Shiva.

How is it in Thailand, a country where over 90% of the population is Buddhist, there are shrines to Hindu gods where people pray to Hindu gods? Are they praying for wealth, good luck etc or for help on the Buddhist path? Does this happen in other Theravada Buddhist countries (I'm especially thinking of Sri Lanka, due to its proximity to India, the home of Hinduism).

Do you think it is acceptable for a Theravada Buddhist to pray to Vishnu or Ganesh for help with worldly affairs like a new job, as long as one recognises that they are lower than the Buddha?

Most falsely educated people see the dharma traditions through the corrupted translation perspective and completely miss the whole cosmological teachings and scuffle around to find definitions and concepts to explain that which is beyond conceptual thinking and in their ignorance claim that to be the absolute truth and they are somehow the authority, regardless of real traditions or the way of the realized.

All isms, buddhism, Hinduism, Jainism and so on are man made fabrications and re run through traditions and education systems and are hell bent on making divisions, creating false historical timelines, personalities that belong to each differing view and religious sect. All of this is foreign to the real dharma and belongs only to mundane empirical speculators, mundane philosophers and crooked linguistics.

Vishnu is vishuddhi and simple means all pervading, and is seen in the depths of the inner view, each sanskrit letter will have a deeper meaning than the common intellect can conceptualise. Ganesh ji is the full embodiment of dhyana~'jhana who is knwn to take away all obstacles, even many hindus now pray for material success by ways invested wrongly toward Him(although He is neuter , Brahman) that he will somehow provide success in business and so on, dhyana takes or removes the negative vasanas or samskaras~sankharas in the citta to have full view of what the Absolute is and remove all obstcles to Bodhi, this is Ganesh Ji's boon, this is the boon of Dhyana~jhana, he sits on Bodhi laddu sweets, each moment of awakening is sweet, his trunk is sushmna the subtle nadi, left is ida moon lunar chandra and right is solar surya, pingala. Ganesh Ji rides on a mouse or a rat this is inquiry, it runs around here and there but he can smell the Bodhi laddu sweets, inner inquiry is higher than prayer.

In pali tradition Ganesh Ji is Jhana, Ida is mogallana~moon power and Pingala is sariputta solar power the two attendants of Buddha~that which fully awakens the citta.

Siddharta is not a historical figure that lived 2500 years ago, siddha and arta is the exalted essence of the citta, where the citta lived in heavenly realm surrounded by opulence, even in these siddha states citta could see the dawning of death, disease and old age b his desire he met with sadhu, sa is aham the sacred vibration in brahmanda inner universe, dh is held or absorbed and U is the highest letter to represent transcendence. Siddharta then trained with the 5 senses( ascetics) and when he was blessed by devi's divine milk the 5 ascetics abandoned or separated and then citta became awakened buddha. Buddha is not a historical figure, its a potential in everyone and not limited to any mundane ideas, isms, dates, historical places or persons.

This is not a justification for anything nor does it make anything more acceptable.......
Consider: Since many buddhists in thailand get drunk weekly is it acceptable to do so?
chownah

It's so sad so many people died in Thailand's drink-drive accidents. I think it's the highest in the world if I am not wrong.
Top

KiwiNFLFan wrote: ↑
Thu Aug 08, 2019 11:23 am
Do you think it is acceptable for a Theravada Buddhist to pray to Vishnu or Ganesh for help with worldly affairs like a new job, as long as one recognises that they are lower than the Buddha?

Just watch out for the Theravada police!
"If only it were all so simple! If only there were evil people somewhere insidiously committing evil deeds, and it were necessary only to separate them from the rest of us and destroy them. But the line dividing good and evil cuts through the heart of every human being. And who is willing to destroy a piece of his own heart?"

KiwiNFLFan wrote: ↑
Thu Aug 08, 2019 11:23 am
Do you think it is acceptable for a Theravada Buddhist to pray to Vishnu or Ganesh for help with worldly affairs like a new job, as long as one recognises that they are lower than the Buddha?

Just watch out for the Theravada police!

u can pray if it gives u little confidence and that little confidence increases ur productivity in any work.
Find a tree and practice jhana or dont regret later- Buddha
Something exist, dont exist, both exist and non exist, neither exist nor dont exist .. all these four possibilities are wrong- Nagarjuna
Find a dhamma companion or roam alone like rhinoceros in the wild- Buddha
If you are not happy even after following 8NP then you are doing it wrong- CL (confused layman)
Top
Post Reply
22 posts