A Buddhist discussion forum on the Dhamma of Theravāda Buddhism
https://dhammawheel.com/

PuerAzaelis wrote: ↑Tue Dec 12, 2017 10:42 pm Seriously I apologize that was not appropriate. PS: some of my friends are Jewish, I am a little sensitive.

Respectfully, this is not relevant to an informed discussion. I also have Jewish friends. The point I previously made, which you objected to, is the 'left-wing-victim-narrative' used by blacks, gays, women & other so-called 'minorities', that appears to characterize US politics, is primarily of Jewish origins & mimics the historical Jewish victim narrative; just as the sexual liberalism of the entertainment industry largely of Jewish origins. I do acknowledge there obviously were non-Jewish people, such as legislators, supporting this liberalism. Similarly, it appears quite obvious US foreign policy often has an Israeli or Zionist narrative; & the US mass-media that propagates this narrative is largely Zionist in its leanings. Therefore, if you believe what I have posted here is factually wrong, you are welcome to provide evidence & information to educate me that my views are wrong or inaccurate. However, to claim you have Jewish friends is not a response because it is more name-calling of 'anitsemiticism', as described (but not mentioned) this video.

Is that Australian slang for person of color? If you don't mind me asking, what is your ethnic background?

A wog is probably similar to US 'wop'; a person of darker skinned Mediterranean origins.

by PuerAzaelis
Yea I get it. I just have knee-jerk reactions. I think I should avoid political discussions.

PuerAzaelis wrote: ↑Tue Dec 12, 2017 11:53 pm Yea I get it. I just have knee-jerk reactions. I think I should avoid political discussions.

That's up to you. But I merely posted my impression that both left-wing & right-wing US politics have many Jewish narratives. When I use the word "Jewish", I am referring to a sub-culture & ideology (rather than a racial group). I did not say this about the politics of other Western nations. I was clear in my original post that these narratives are historically absent from Australia politics, for example. In Australia, the word "liberal" means "conservative" or "right wing" because "liberals" were historically primarily concerned with free-trade & free-economics, including labour relations. "Liberal" in Australia does not mean to be sexually liberal or to support LGBT, etc.

by Dhammanando
Authoritarian right, but only just, and looking pretty moderate for a UKIP voter. In the UK monks are not prohibited from voting, and those living abroad can have a postal or proxy vote.

by Disciple
Here's mine 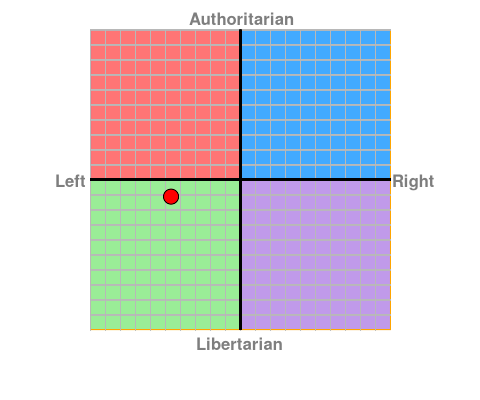 Mine's about where I thought it would be nowadays... ... how and why it's shifted over the years has been explained previously here.

by Cittasanto
Mine is also about the same. I was more leftist and less libertarian
left moderate social libertarian now and was left social moderate before.