The Girl Cinca : Was it among THE EIGHT GLORIOUS VICTORIES?

The Girl Cinca : Was it among THE EIGHT GLORIOUS VICTORIES? 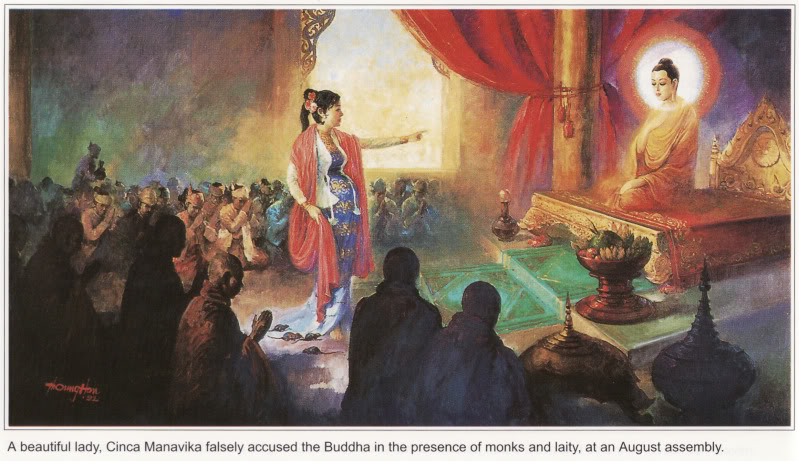 “Know you not, Sister, that Gotama the ascetic is going about and doing us harm, cutting off all the honour and liberality that was shown us?”
—“I did not know it, Sirs; but what can I do?”
—“If you wish us well, Sister by your own doing bring a stain upon the ascetic Gotama, and put an end to his honour and the gifts he receives.”
She replied, “Very good, Sirs, leave that to me; do not trouble about it.” With these words she departed.

After that, she used all a woman’s skill in deceit.

When the people of Savatthi had heard the Law, and were coming away from Jetavana, she used to go towards Jetavana, clad in a robe dyed with cochineal, and with fragrant garlands in her hands.

When any one asked her, “Whither away at this hour?” she would reply “What have you to do with my goings and comings?”

She spent the night in the heretics’ monastery, which was close by Jetavana: and when early in the morning, the lay associates of the order came forth from the city to pay their morning salutation, she would meet them as though she had spent the night in Jetavana, going towards the city.

If any one asked where she had stayed, she would answer, “What are my stayings and lodgings to you?”

But after some six weeks, she replied, “I spent the night in Jetavana, with Gotama the ascetic, in one fragrant cell.”

Then the unconverted began to wonder, could this be true, or not.

After three or four months, she bound bandages about her belly, and made it appear as though she were with child, and wrapt a red robe around her. Then she declared that she was with child by the ascetic Gotama, and made blind fools believe. After eight or nine months, she fastened about her pieces of wood in a bundle, and over all her red robe; hands, feet, and back she caused to be beaten with the jawbone of an ox, so as to produce swellings; and made as though all her senses were wearied.

One evening, when the Tathagata was sitting on the splendid seat of preaching, and was preaching the Law, she went among the congregation, and standing in front of the Tathagata, said—

“O great ascetic! You preach indeed to great multitudes; sweet is your voice, and soft is the lip that covers your teeth; but you have got me with child, and my time is near; yet you assign me no chamber for the childbirth, you give me no ghee nor oil; what you will not do yourself, you do not ask another of the lay associates to do, the king of Kosala, or Anathapindika, or Visakha the great lay Sister. Why do you not tell one of them to do what is to be done for me? You know how to take your pleasure, but you do not know how to care for that which shall be born!”

So she reviled the Tathagata in the midst of the congregation. .. [472. Maha-Paduma Jātaka]

This incident is considered to be one of THE EIGHT GLORIOUS VICTORIES.
Why is it considered a big victory ?
Would it become a difficult case if there was not Sakka ?
Are these type of allegations hard to defend by ascetics?
"Bhikkhus, whatever the Tathāgata speaks, _ all that is just so and NOT otherwise."
Top

Re: The Girl Cinca : Was it among THE EIGHT GLORIOUS VICTORIES?

thang wrote: ↑
Mon Mar 04, 2019 3:54 pm
This incident is considered to be one of THE EIGHT GLORIOUS VICTORIES.
Why is it considered a big victory ?
Would it become a difficult case if there was not Sakka ?
Are these type of allegations hard to defend by ascetics?

The Buddha miraculously made the bandages, extra clothing fall apart, revealing her deceit, that she was not even pregnant.

I have always wondered though; what if she really was pregnant; not from the Buddha but say from her boyfriend or some other man? How would the Buddha have exposed her deceit in that situation?
TheDhamma.com
Dhamma Wiki
Dharma Wheel forum
Dharma Paths forum
Dharma Wheel Engaged forum
Top

Re: The Girl Cinca : Was it among THE EIGHT GLORIOUS VICTORIES?

DNS wrote:The Buddha miraculously made the bandages, extra clothing fall apart, revealing her deceit, that she was not even pregnant.

Actually it was Sakka who exposed her tricks:

Ja 472 wrote:Just at that moment, Sakka’s throne became hot. Reflecting, he perceived the reason: “Cincamanavika is accusing the Tathagata of what is not true.” Determined to clear up this matter, he came thither with four gods in his company. The gods took on them the shape of mice, and all at once gnawed through the cords that bound the bundle of wood: a wind-puff blew up the robe she wore, and the bundle of wood was disclosed and fell at her feet

Regarding the scenario of an actual pregnancy, considering the social/cultural conditions at that time, Cinca Manavika would likely already had to deal with the headache of her pregnancy right from the onset before her belly starts growing in size to be used as proof for the accusation.
Top
Post Reply
3 posts • Page 1 of 1