If you wish to partake in casual "off-topic" discussion amongst spiritual friends, please do so in the Lounge at Dhamma Wheel Engaged.
Forum rules
Locked
21 posts

It was only a year ago Carlsen defeated Anand for the World Chess Championship. Now it is time for Carlsen to defend his title already. In previous decades, world champions often got a 2 to 4 year break.

This is not a boxing style rematch. Anand had to earn the right to compete against Carlsen, by competing in a 8 person tournament of the top contenders for the championship. Anand won that Candidates Tournament earlier this year.

In the recent newspapers read about Carlsen mentioning that he was loosing badly in recent times , because his mind was going in self-destruct mode . I couldn't help but think that the case is applicable for most of us . Getting attached to the different kind of sensations that courses within us from time to time . For some, the unpleasantness is for long periods , for some, the pleasantness is for long periods . For the lucky , its a see saw ride of sensations , hopefully bringing along with it , the taste of Dhamma .

Wishing Carlsen finds the rythm back, and Anand gives a good fight .
The Path of Dhamma

The path of Dhamma is no picnic . It is a strenuous march steeply up the hill . If all the comrades desert you , Walk alone ! Walk alone ! with all the Thrill !!

Game 3:
Anand wins!! It is the first win by Anand in a World Championship match with Carlsen. He didn't win any games last year and now finally won one this time, in game #3.

David N. Snyder wrote:Game 3:
Anand wins!! It is the first win by Anand in a World Championship match with Carlsen. He didn't win any games last year and now finally won one this time, in game #3.

Thanks for joining me. What can we expect from Anand today? After just two games, Anand is already behind with a tough loss with black in game two. He also had a shaky first game with white. If he does not turn things around now, it may be too much of an uphill climb to try to regain his title.

I expect a more aggressive Anand today. He realized that he cannot keep up with Carlsen in dry positions. Changes in strategy and changes in attitude are needed. As I said after game two, he must play the position and not Carlsen. Just loosen the collar, take a deep breath, have fun, give his all and qué será será!

15...a4 It is interesting that both teams feel that this position is good for them. We will see which team did a better job preparing for this game. 16 Rc1 is the move here. But Anand is taking time for this move and he is biting his nails. Did he forget his analysis?

17 Ng5 It seems that Magnus is surprised by 17 Ng5. Perhaps he was expecting Nd2. Magnus has a few decent responses. 17...Nxg5 17...Ndf6 or 17...Bxg5. He's taking time to decide how to proceed. Magnus has both hands over his face. He is in deep thought. Difficult decision to make on how to to continue this game.

17...Ndf6 After about 30 minutes, Magnus chose the safer Ndf6. Wise choice if he can't remember all the analysis. Anand can take the knight of e4 then Bd6 or even Qc2. White is slightly better but Anand also needs to decide how to continue.

18 Nxe4 Nxe4 Interesting choice for Anand here is 19 f3. Anand could not have asked for a better chance. This is super sharp. One mistake by either side and it's over.

22...bxa3 Let's be clear. Both sides know this line. But it seems that Anand remembers it better & Magnus has to recall what he knows.

23...Rxe5 And the best option for white here is 24 Qxb6. White has a lot to play for. Black's position is cramped.

24 Qxb6 Anand took time for this move, which is the only move top maintain initiatives. Now the plan for Magnus is to put his f8 R on c8. Therefore Qd7 makes sense.

25 0-0 Anand got cold feet and went with a safer option. Magnus only option is to put his Rook on the c file to block the passed pawn.

25...Rc8 Anand has to try to work the c pawn. So the idea is to play Rc6 to stop the mobility of the black queen, then either double up the rooks and Qa6 or move the other Rook to the b file.

26 Rc6 Time will be a serious factor soon. Magnus has about 25 minutes for 15 moves or so without increments. Not an easy task in this position. The problem for Magnus is there is really no "good" plan. And he cannot just sit because Anand can improve his position.

27...Bb4 A very interesting idea from Magnus. White cannot take the bishop because his rook of c6 is hanging. The idea is Ba5 to attack c7 pawn. Magnus is very clever. He is making Anand calculate this out. He is making it complicated for his opponent

White is clearly better but has many options to continue: Ra1, Rc2, Qa6 or even Qb8. What to do, what to do?

Not a good sign. Anand shook his head a few times. I think he's shocked by Bb4 from Magnus.

28. Ra1 This is the best option at this moment and Anand found it. 7 minutes for 12 moves for Magnus without increments. This is getting serious!

30 Qc4 I expect resignation to come soon. Impossible to hold this position. 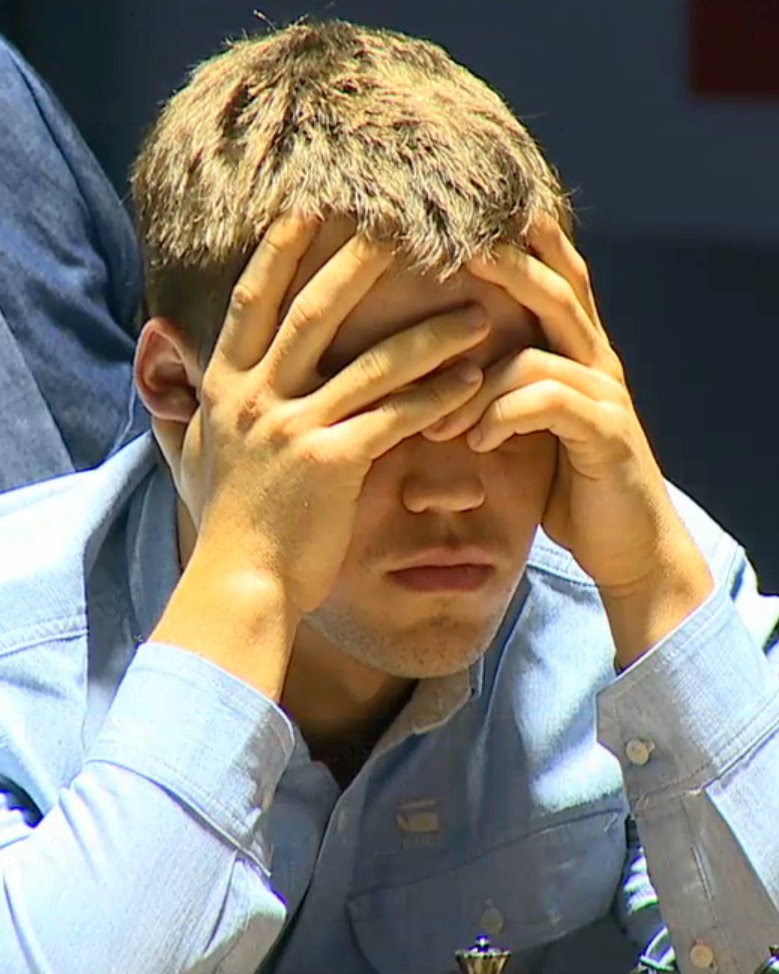 Carlsen played the aggressive Maróczy Bind setup against the Kan Variation of the Sicilian Defence, and accepted a set of isolated doubled pawns in return for active play. At move 26 there was a double blunder as Carlsen was trying to win. Carlsen's 26.Kd2?? should have been answered with 26...Nxe5! (with a discovered attack on the g4-rook) 27.Rxg8 Nxc4+ (zwischenzug) 28.Kd3 Nb2+ 29.Ke2, and Black will wind up with an extra pawn and excellent winning chances. However, Anand did not realize this and played 26...a4?? handing the advantage back to Carlsen that he converted to a win.

The commentators were extremely disappointed that they just missed breaking the record for longest game in a world championship match.

This strikes me as very funny! Two men are playing a board game and it takes a long time and alot of moves and people watching are engulfed in the dukkha of extreme disappointment because it didn't take three more moves.....and it was a draw. The two players could have (I guess they could have) just made a couple of meaningless moves at the end and changed the dukkha from extreme disappointment to extreme jubilation!....just think how powerful those three meaningless moves could be. Do those three meaningless moves exist, not exist, neither exist nor not exist, or both exist and not exist?....regardless, what power they have over those watching.
chownah
Top

Playing chess is helpful in forgetting existential pain, unfortunately others don't care about your well-being and want to win with you. That is painful. So in order to escape this pain you can rather teach how to play chess, or take a job of commentator. But since they expect from you that you will comment the game, and without computer you are unable to say something reasonable about game of two strong grandmasters, it's again painful, so you try catch any opportunity to say something ... So there is nothing powerful in those three meaningless moves.

The man who wants to avoid grotesque collapses should not look for anything to fulfill him in space and time.

chownah wrote:The two players could have (I guess they could have) just made a couple of meaningless moves at the end and changed the dukkha from extreme disappointment to extreme jubilation!....just think how powerful those three meaningless moves could be.

I don't think they could have. On move 122 Carlsen has no choice but to take Anand's rook with his knight, and once that's done neither side has sufficient material to force mate. Under the FIDE Laws of Chess (Article 5.2.b) when a position arises that can only result in a draw, the game comes to an immediate end, provided that the move that led to this position was a legal one. And so I doubt the umpires would have permitted the players to go on making meaningless moves just so that they could establish some new world record.
Svākkhātaṃ brahmacariyaṃ, sandiṭṭhikam’akālikaṃ,
Yattha amoghā pabbajjā, appamattassa sikkhato.

“The holy life is well proclaimed,
directly visible, immediate,
Where not in vain is the going forth
of one who trains heedfully.”
— Sela Sutta
Top
Locked
21 posts